9 Photos For Your Coffee Break: Tim Hoffesommer shot the popular hot drink for his master’s exam

Coffee is the fuel, or even the elixir of life, for many photographers. So what could be more fitting than to shoot it in its different forms for the master’s exam?
Tim Hoffesommer, new-fledged master of photography from the Toelle Studios in Iserlohn (Germany), did exactly this and has created an homage full of atmosphere to the hot beverage.

Tim told us what the concept behind this photo series was and how he designed the composition and the lighting setups. The ultra-fast monolight Cito 500 plays a big part in this to integrate a certain dynamic into some of the photos.

Come with us to this coffee enjoyment of the photographic kind!

Tim Hoffesommer: “Each and every photo contains many hours of setting lights and post production. It would go beyond the constraints of this article to mention all the details for the final image, that’s why I want to focus here on the ideas and the concept.”

“In each photo, the coffee beans are located in the foreground. On one hand, they stand for the base of every coffee, and on the other hand, all the photos can be used together as a single, large landscape format image. The photos can be swapped with each other, so that the order can be adjusted individually. 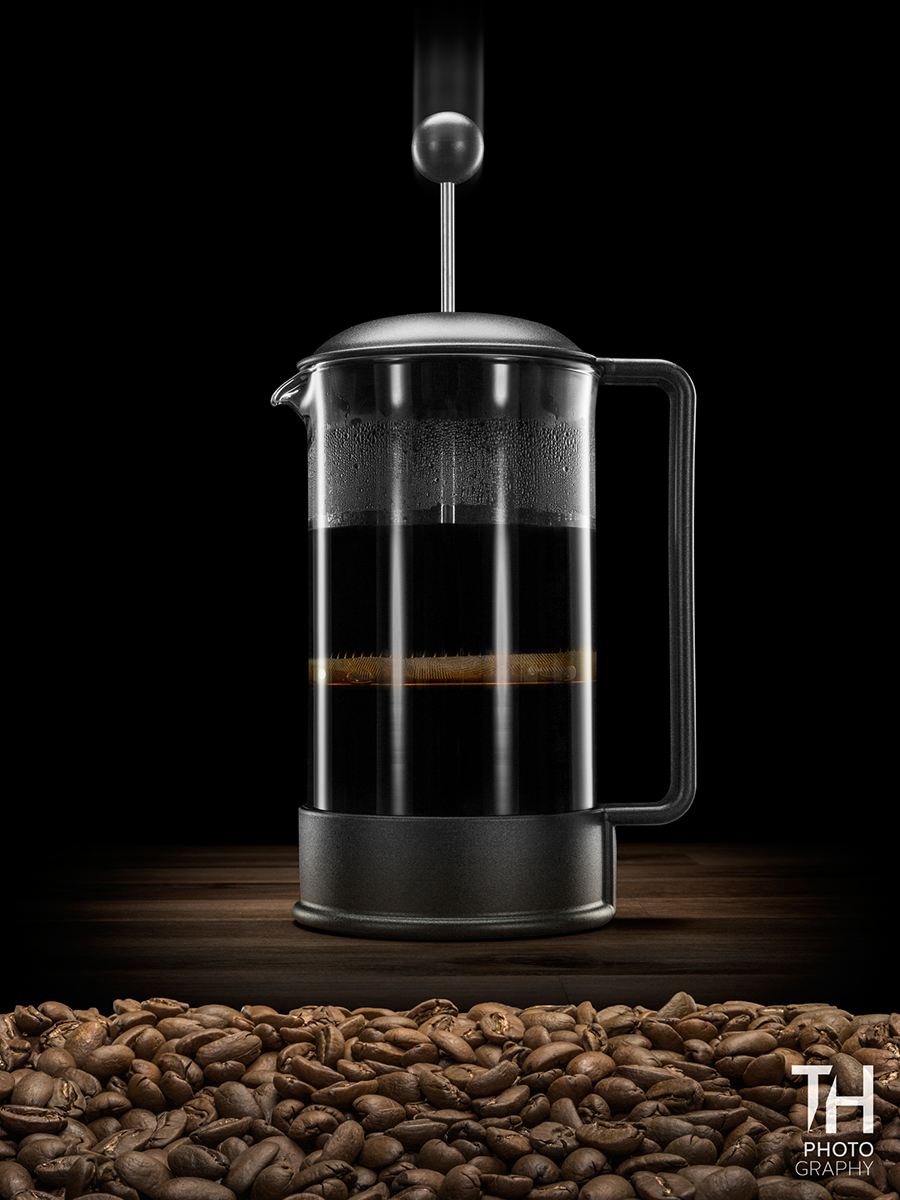 “The French Press follows a pretty simple principle, so this shot loosens the photo series up with its simplicity. A selective motion blur brings dynamic to the photo and makes the process more understandable as well. Two Stripboxes were used as sidelights for the necessary separation from the background, and two standard reflectors, placed in the front and equipped with diffusion paper, took care of the illumination of the scenery in the foreground.” 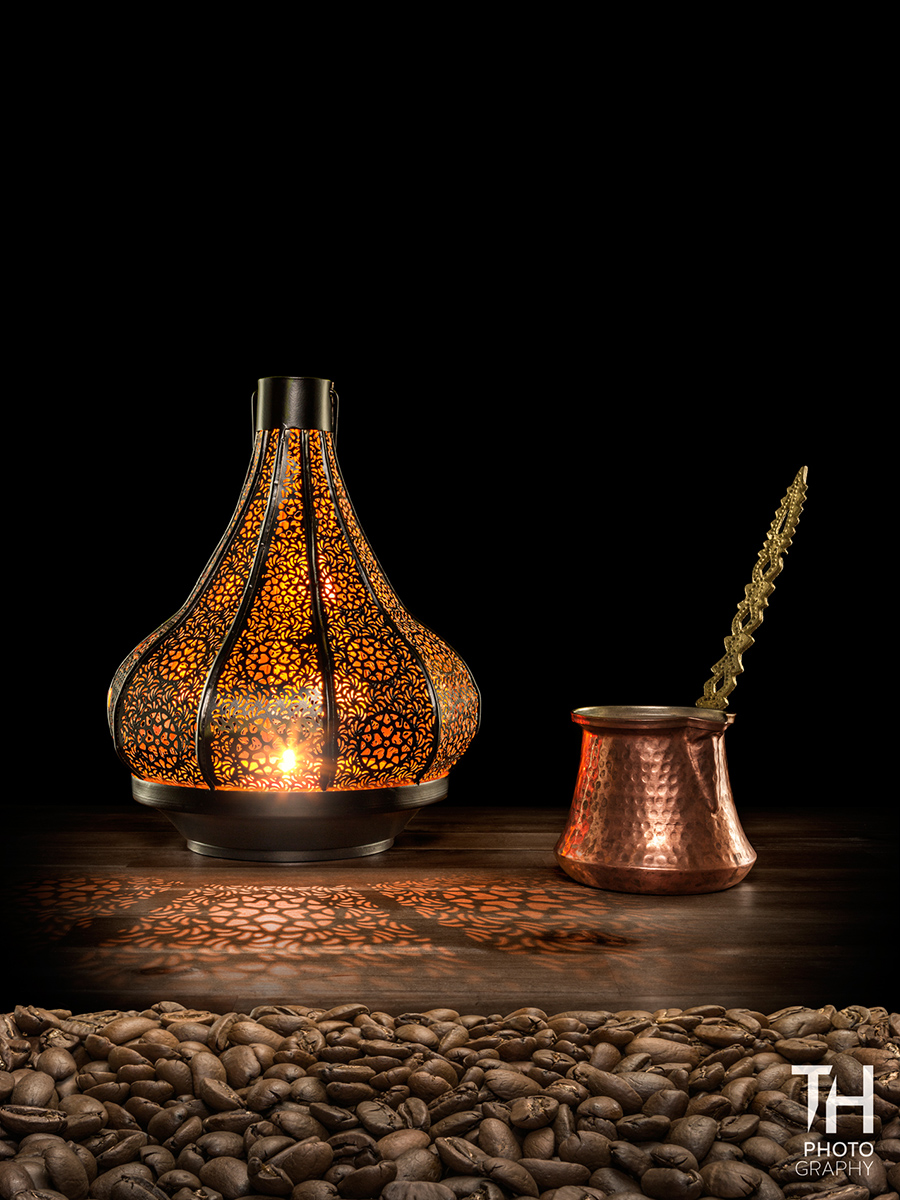 “This image shows the Turkish mocca jug, and now it slowly becomes clear that a short trip around the world will be made. Flash light and natural light have been combined here via two shots. In the first shot, the Stripboxes show their strength once more by accentuating the edges perfectly and providing enough light even with the use of a diffusion foil. One light from the front lightens up the mocca jug and puts a reflection on it.

In the second shot, just the light of the lantern was captured in order to later combine it with the first shot. This way I could create a cozy and natural light effect which generates a wonderfully oriental atmosphere for the viewer.” 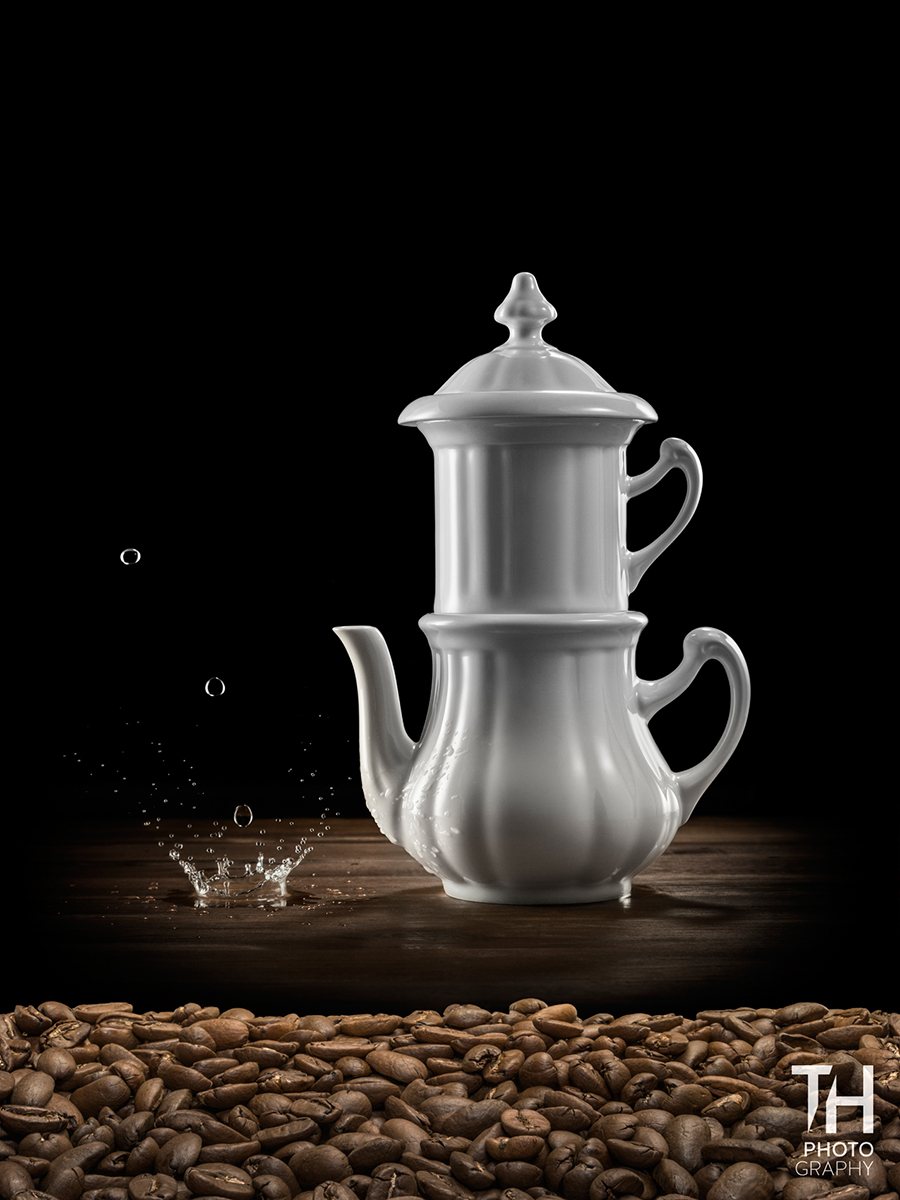 “One more shot that presents itself in simple elegance. Now the Cito 500 strobes display the strength of extremely short flash duration times completely. In a balanced composition, the jug is standing on the right, while a pretty curve of drops falls into the photo and leaves dynamic splashes on the wood.

The use of the Cito 500 makes it possible to perfectly freeze the drops in the air as well as the splashes without any blurs. Again, I used two Stripboxes from the back as well as a fill light from the front. This way, the purity of the Karlsbad coffee maker can be perfectly pictured through the clear water.” 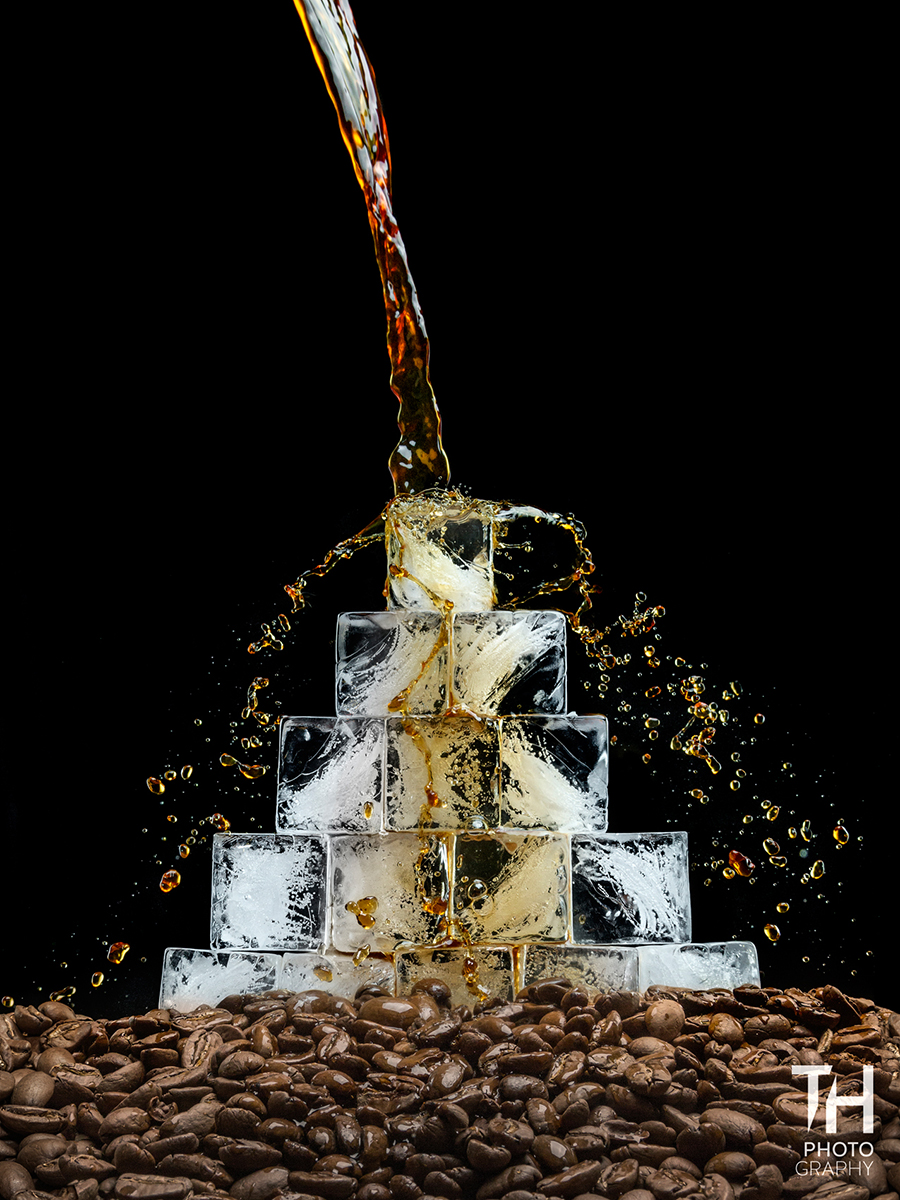 “As the name already reveals, the coffee is not being prepared with boiling water, but with cold water, in which the powder soaks for at least 8 hours.
A pyramid made out of ice cubes symbolizes the cold water, describes the serving suggestion and helps provide a symmetrical composition. Two Stripboxes from the back, used on the Cito 500, bring the fun to the shoot once more.

The hot coffee is being poured over the ice cube and the perfect moment has to be caught. Thanks to the short flash duration of the Cito 500’s, it is no problem to ‘freeze’ any fast motion. It is even possible to make serial shots, since the Cito 500 has an extremely short flash recycling time. This way, a lot less tries are needed to achieve the optimal result.”

“The following pictures carry the same high-contrast, dark look, but they don’t serve as a large landscape format, which allows for completely different perspectives. Every flavor is immediately recognizable by the viewer, because either a vibrant color or a high brightness make clear what the main ingredient is. For this reason, the main object is always separated from the brown and dark base of the wood and the coffee.” 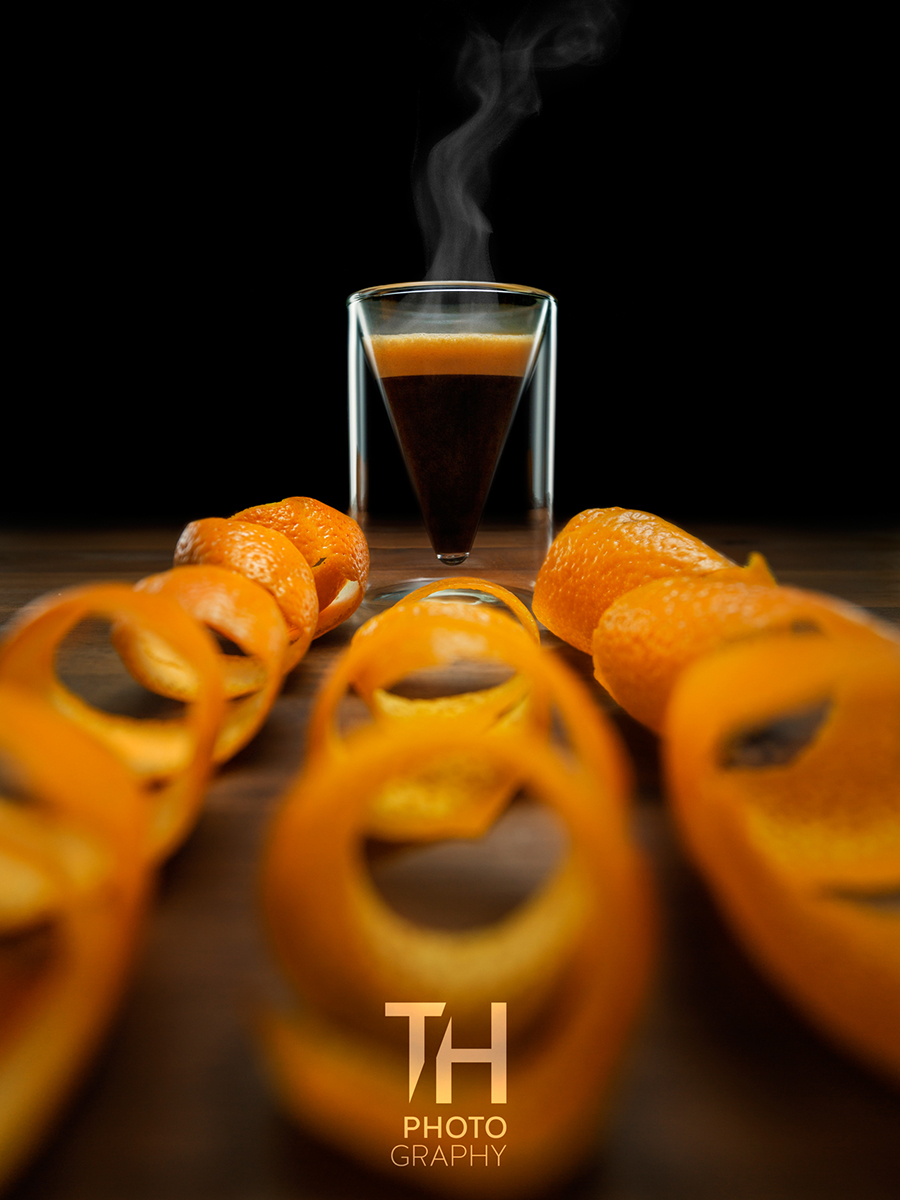 “Due to a short focal length and a low perspective above the wooden panel, three orange peels guide the way from the corners and the middle into the photo, and end at the steaming coffee. Thus a symmetrical setup is created, which makes the photo more graspable and calmer.

The resulting triangle of peels brings the law of the simple form into play, which corresponds to the human perception. On top of that, the focus point is set on the cup, which creates a high three-dimensionality together with the open aperture.
Besides the two well-known grazing lights through diffusers, a slightly tilted spot illuminates the setup from above, which creates an enormous vividness, because the orange peels cast a clearly visible shadow.

With the Cito 500 monolight and the grid, an extremely precise positioning of the light and the mirroring in the glass rim are possible, so that the shot looks clear and brilliant without brightening everything else too much. This turns the glowing orange color into an eyecatcher, which the viewer associates with freshness and fruitiness.” 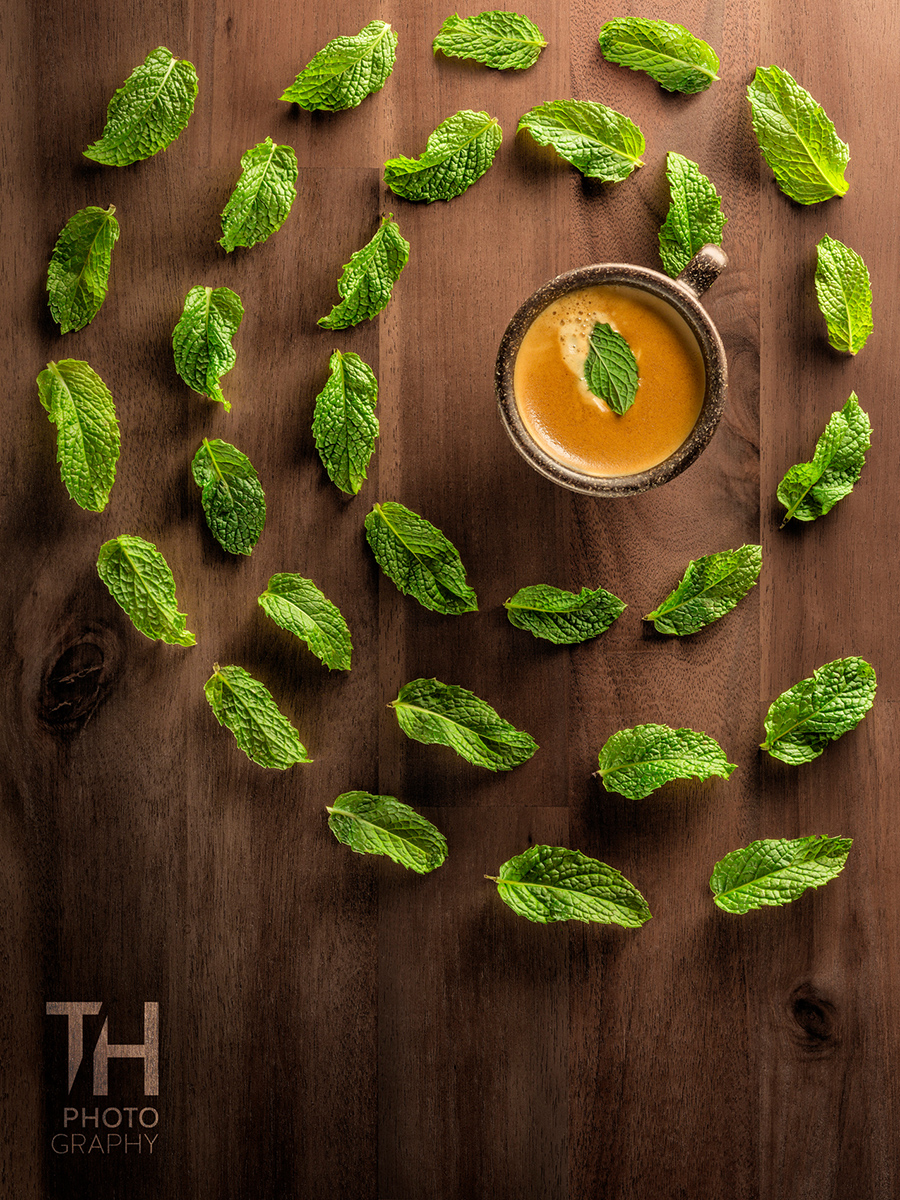 “To bring some variation into this series, a longer focal length and a direct top view result in a strongly graphic effect. The cup, which is located in the top right corner of the photo, is made of old coffee grounds. This way, the shot emphazises sustainability at the same time. The mint leaves have been arrangend in a spiral to create curves in the picture.

For the lighting, I used bidriectional lighting: Two Stripboxes have been placed at the height of the wooden panel, turned to the horizontal position. The light modifiers create an astonishingly sculptural look without producing hard and edgy shadows.”

“The coffee with milk is a very classic flavor, which is why no strong color provides the eyecatcher here, but the light, white milk in a dark, black and brown environment. The coffee beans are literally being wrapped in the milk, so that a lot of action is happening through the splashing milk.

The Cito 500 monolights, equipped with a Stripbox from the back and a softbox from the front, once again provide the glorious combination of high flash power with short flash duration. The milk looks like a sculpture ‘standing” in the air and can be enjoyed without any interfering blurs. To make the milk seem as impressive as possible, a lower camera angle is used for a more monumental effect.” 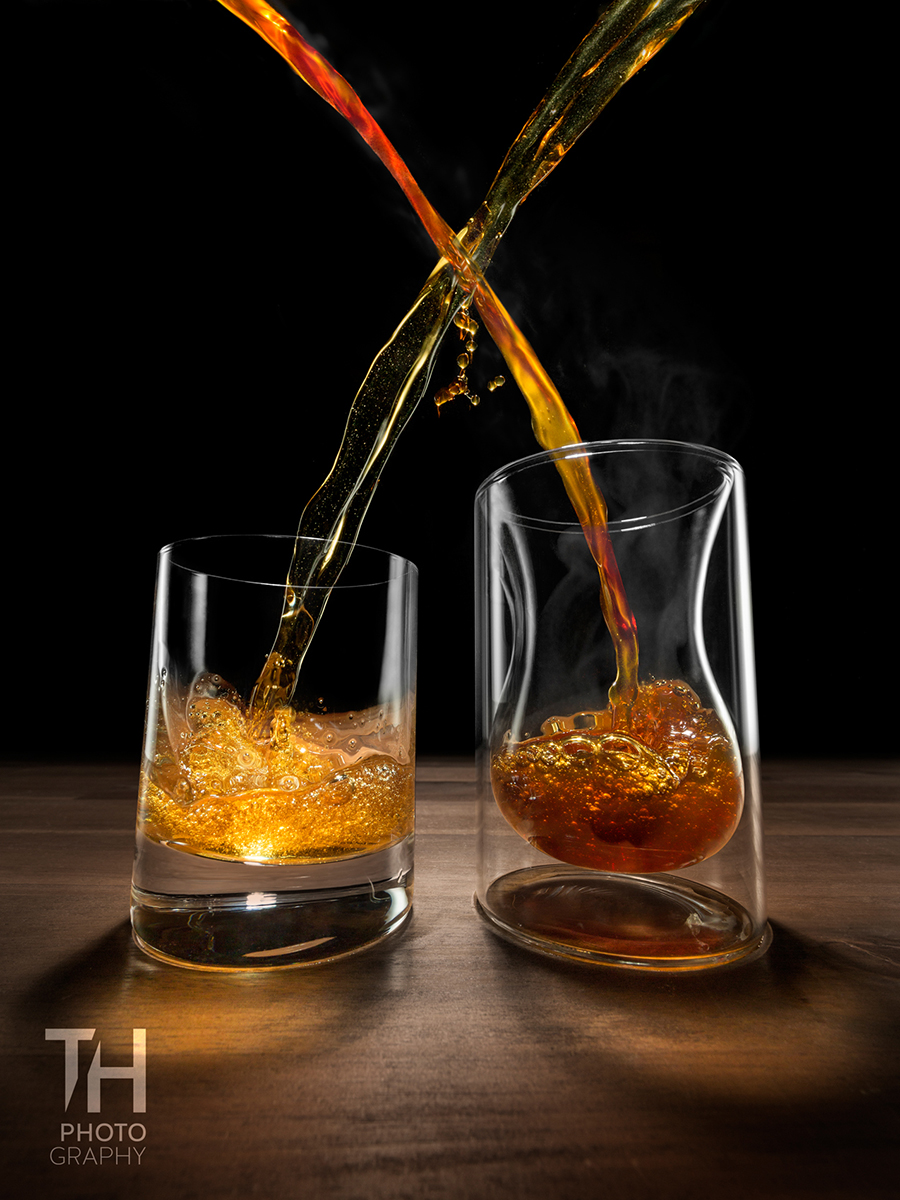 “The next shot of the series pictures a variation of the famous Irish Coffee. For this, you need two ingredients: The first one is – of course – the coffee and the second one a high-quality whisky. It creates the well-known color effects in the photo, which create an even more luminous character together with the reflections on the wood.

A short focal length makes the two glasses look big and impressive, while the liquids coming from the top seem to run towards the viewer. These two liquids meet in mid-air and blend into this coffee drink.

A completely symmetrical light setup with two Stripboxes from the back for the separation of the glasses from the black background, and a spotlight for a reflection on the wood allow for an impressive overall effect.

The coffee, as well as the whiskey and the drops are perfectly captured with the Cito 500 monolights.
In this case, the very short flash recycling time could be perfectly used with the serial shot mode, so that I could get several usable photos with one try. This reduces the time investment drastically and thus brings even more fun to the shooting process.” 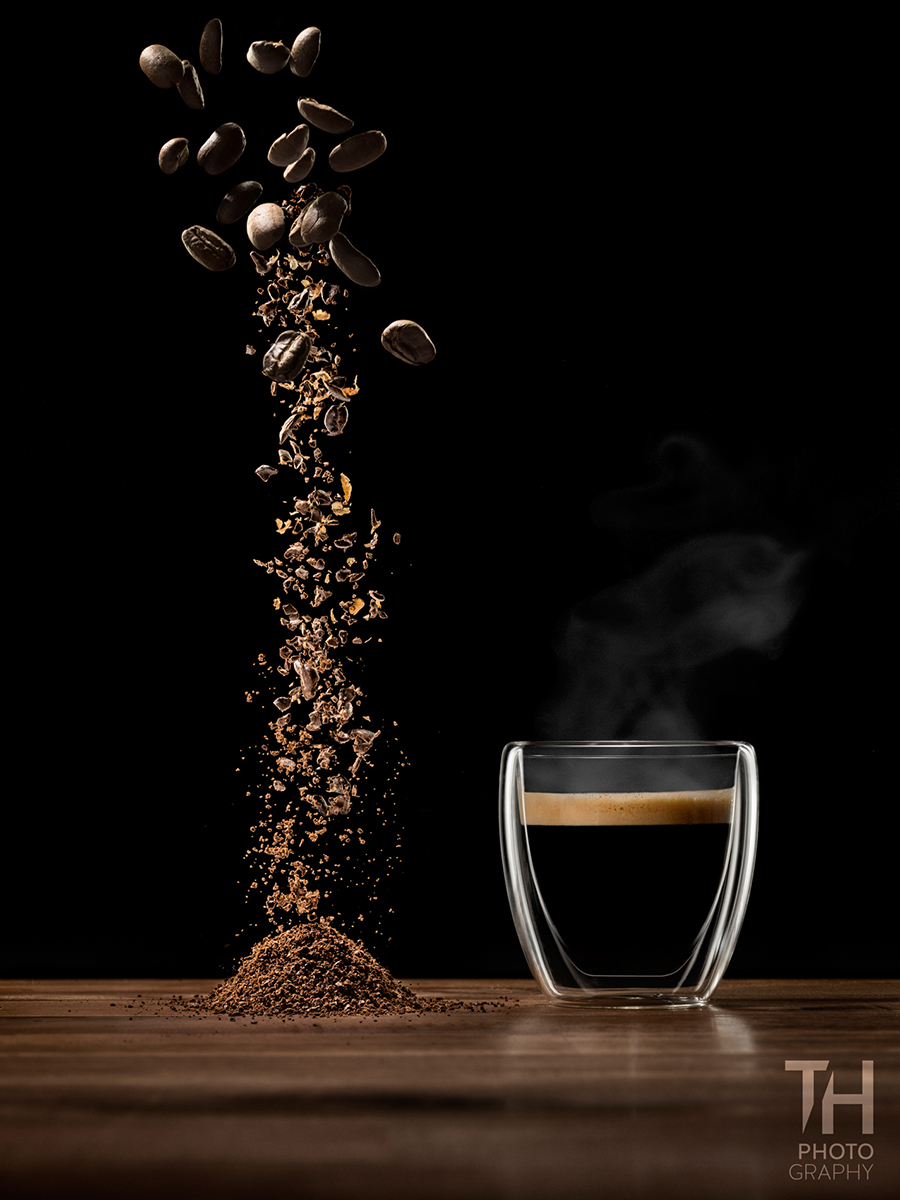 “The only image in the flavor series that doesn’t have a light or colorful area is the classic espresso. The reason for this is that the espresso doesn’t contain any additional ingredient like mint or milk. This way, the viewer can immediately differentiate between classic coffees and drinks with additional flavors.

To build up enough tension and liveliness in this image, the grinding process of the coffee beans has been illustrated here. Whole beans are falling from the top left into the photo and are at first shown roughly ground, then medium ground, before they land finely ground on the wooden panel. And again, I used my proven two Stripboxes for the rim lights on the coffee and the glass cup.

A couple of spotlights make the fine coffee and the upper rim of the cup stand out. Here the strength of the Cito 500 monolights shows once more, because each falling coffee bean could be captured sharply.” 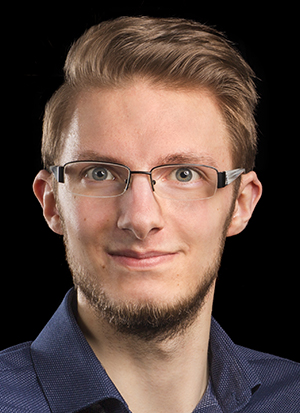 Photography has already fascinated me as a little boy. The older I got, the stronger my wish to create professional photos grew.
So directly after my high school diploma in 2014 I did an apprenticeship in photography, and immediately after that attended the master school, which I have just finished successfully with all exams. At the beginning of this path I hoped to gather much knowledge and joy for the job, but my expectations have even been exceeded, which I am incredibly thankful for.

During the whole time I have received wonderful support, for which I can’t thank my family and friends enough! At that point, I was able to meet new people who have given me great support as well, especially at Hensel. That’s how my ideas for the masterpieces could become a reality.