“Lately, a passion for healthy lifestyle is increasingly embedded in our lives. With the development of the fitness industry and fitness blogging, there is a growing demand for sportswear, equipment, services, and in turn photographers to capture this ever-growing industry.

Veronika Ershova and I recently photographed a group of trainers from one of Moscow’s fitness clubs. We captured some fantastic images at the club testing the latest Hensel’s Expert D 500 monolights monolights with built-in Wifi out in the field. In this article, I will share the steps we followed to achieve the results show in the images below with you.
The shoot was performed directly at the club, and in this article I will tell you how we worked at this location to get effective results.” 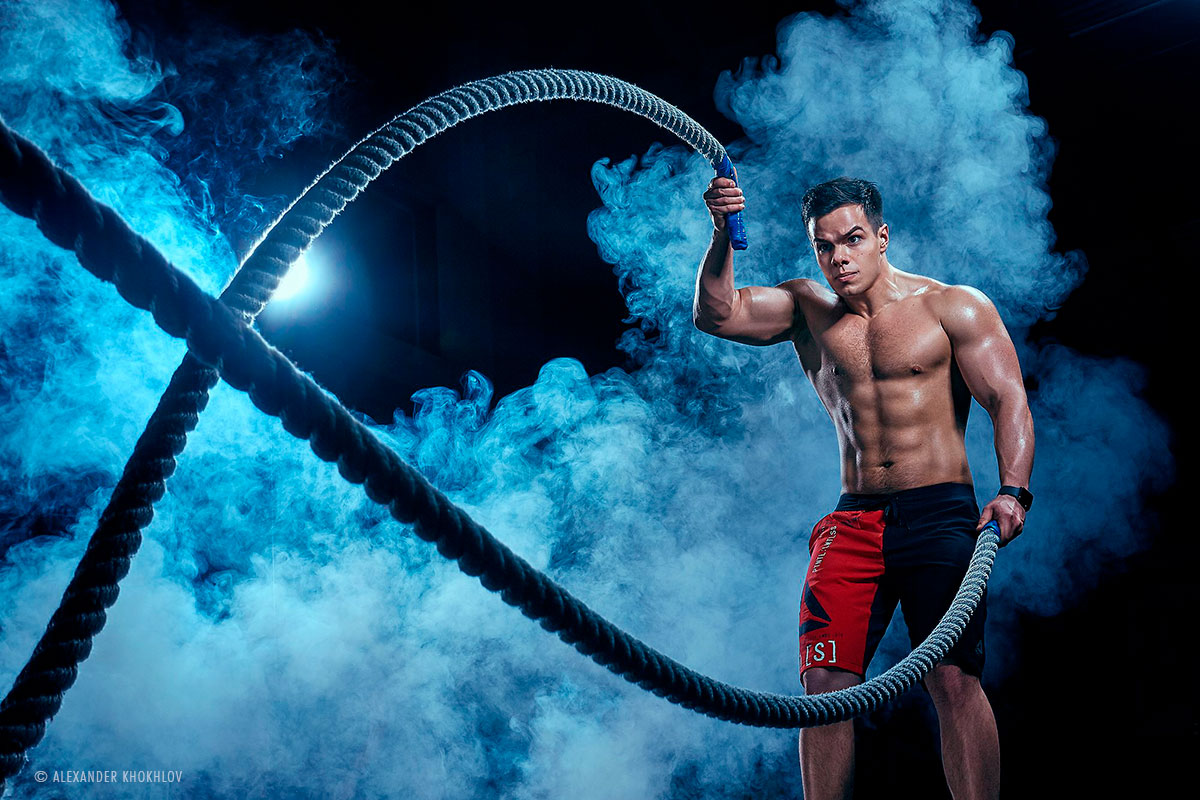 “First, let’s talk a little about the environment and the equipment used in this shoot. The gym we were working in was quite large. Seeing the location, I immediately knew working during the day with the natural light and overhead lamps in the hall was neither going to be sufficient nor conducive to getting the type of images we were looking to accomplish. With this in mind we decided to work at night exclusively with monolights. This allowed us to overpower any unnecessary ambient light and have total control to create our own lighting.

For this shoot we brought four Hensel Expert D 500 strobe monolights with us. For modifiers we brought Hensel’s silver Beauty Dish with honeycomb grid, a standard reflector, two Stripboxes 30х120 cm (11.81 x 47.24”), a 120 cm Octabox (47.24”) and a large white umbrella with a diffusion fabric.
We also brought a smoke machine, which allowed us to add perspective and depth to the pictures.”

“Our goal was to stage photos emphasizing the beauty of the athletes’ bodies, so we took care to prepare specific makeup to mimic the effect of damp skin. We could have asked the athletes to do short workouts beforehand, so they would sweat on their own, but this could have had the negative effect of tiring the models before going into the shoot. In addition, natural sweat, in contrast to the artificial, dries quickly.

For the look of the shoot, we wanted to create images with a lot of contrast using predominantly hard, bright light. We choose to use a top highlight, creating volume in the frame and emphasizing the definition of the athlete’s muscles.”

“We started out shooting one of the trainers while he performed exercises with the TRX Rip simulator. All four Expert D 500ws monolights were used for this series of shots. We created a cross light effect by placing one of Strip light softboxes behind and to the left of the subject, while placing the beauty dish with grid, in front and the right of the subject.

We positioned the 120 cm Octabox vertically above the athlete’s head, which served to illuminate the back of the head and shoulders, helping to separate him from the background. Finally, we used a large umbrella with a diffuser placed behind the shooters back almost on the axis of the subject to help fill in the shadows.” 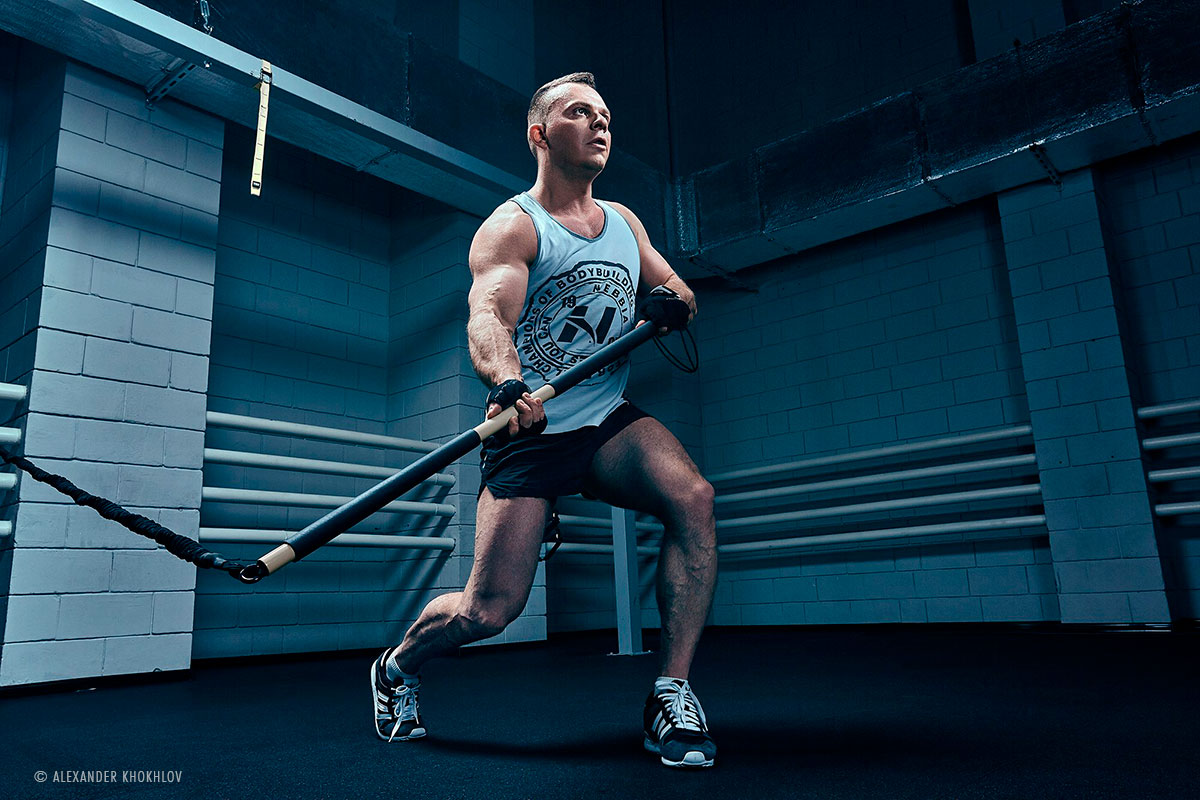 “This lighting arrangement allowed us to change the model’s position while shooting. When subject was turned to the left, the Strip light served as the main light while the silver Beauty Dish functioned as a back light. It was just necessary to adjust the position of the overhead Octabox and umbrella lighting a little to get the desired image. I used a wide-angle lens to visually lengthen the shape of the simulator in the hands of the athlete in this shot.” 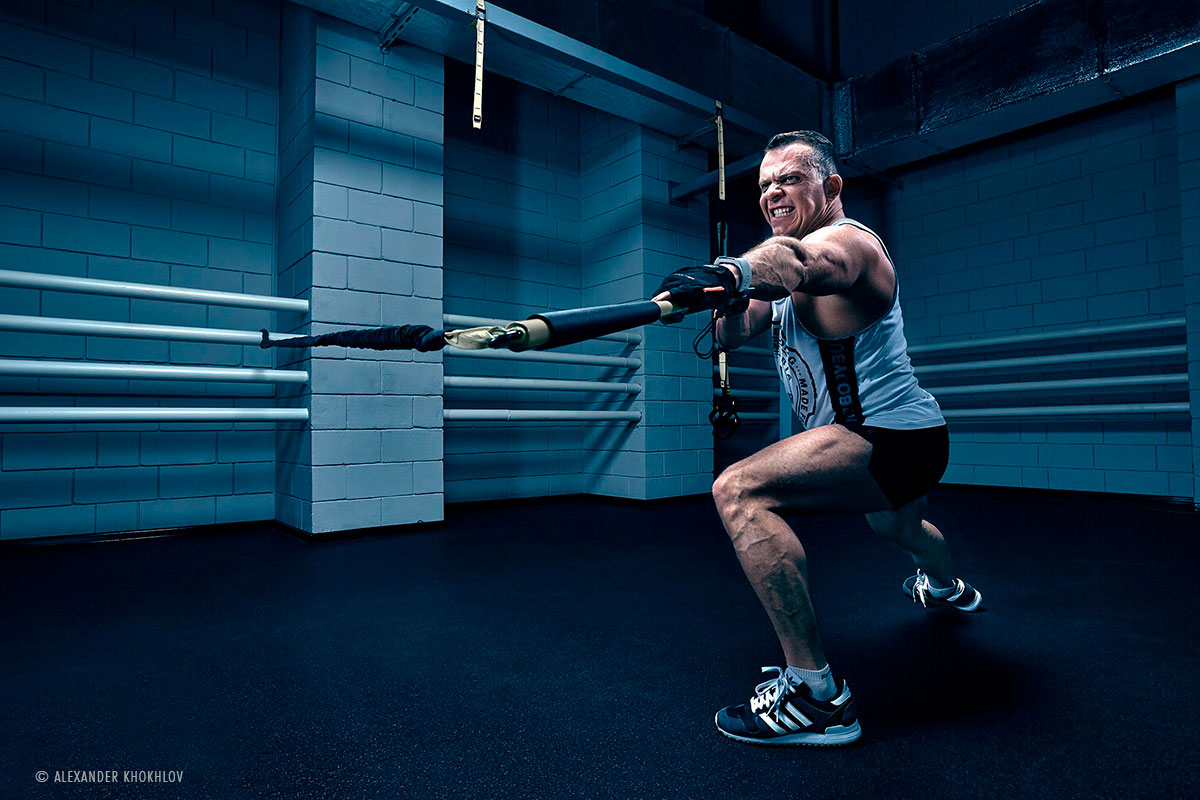 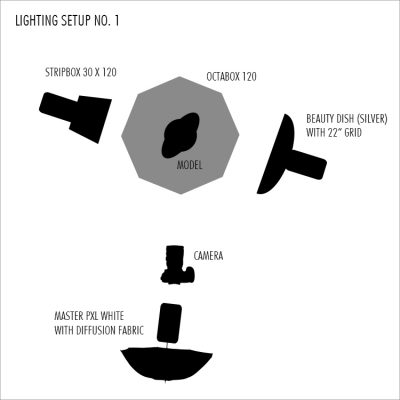 “For the next two portraits, I removed the silver beauty dish and replaced it with a standard reflector that was positioned on the right and slightly behind the model aimed at a foldable silver reflector directly in front of the subject.
The monolight with the standard reflector acted as a rim light highlighting the athlete’s side while also providing front main light by bouncing off the foldable silver reflector in front of the athlete.
The Strip light was positioned to the left of the athlete and the 120 Octabox was used slightly above and behind the subject helping to add volume to the model.” 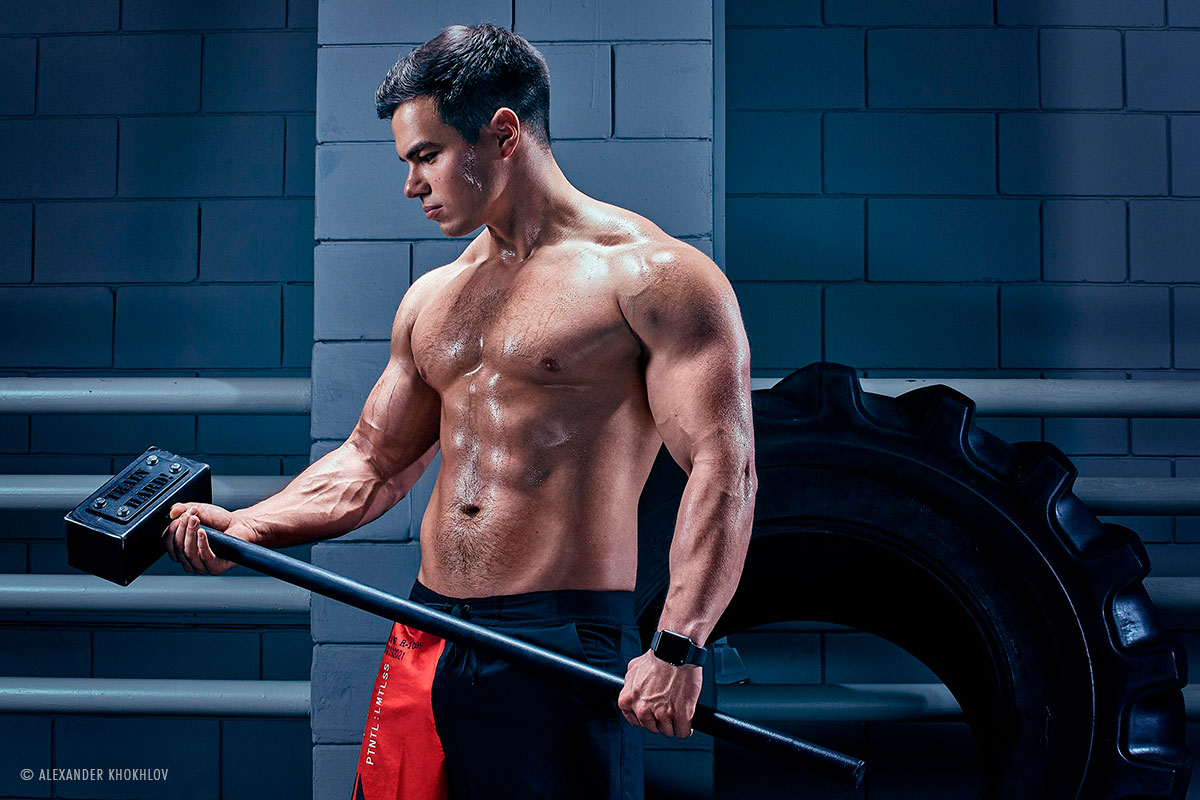 “As you can see, in the following photos we decided to add smoke, which adds extra drama and intrigue to the image.” 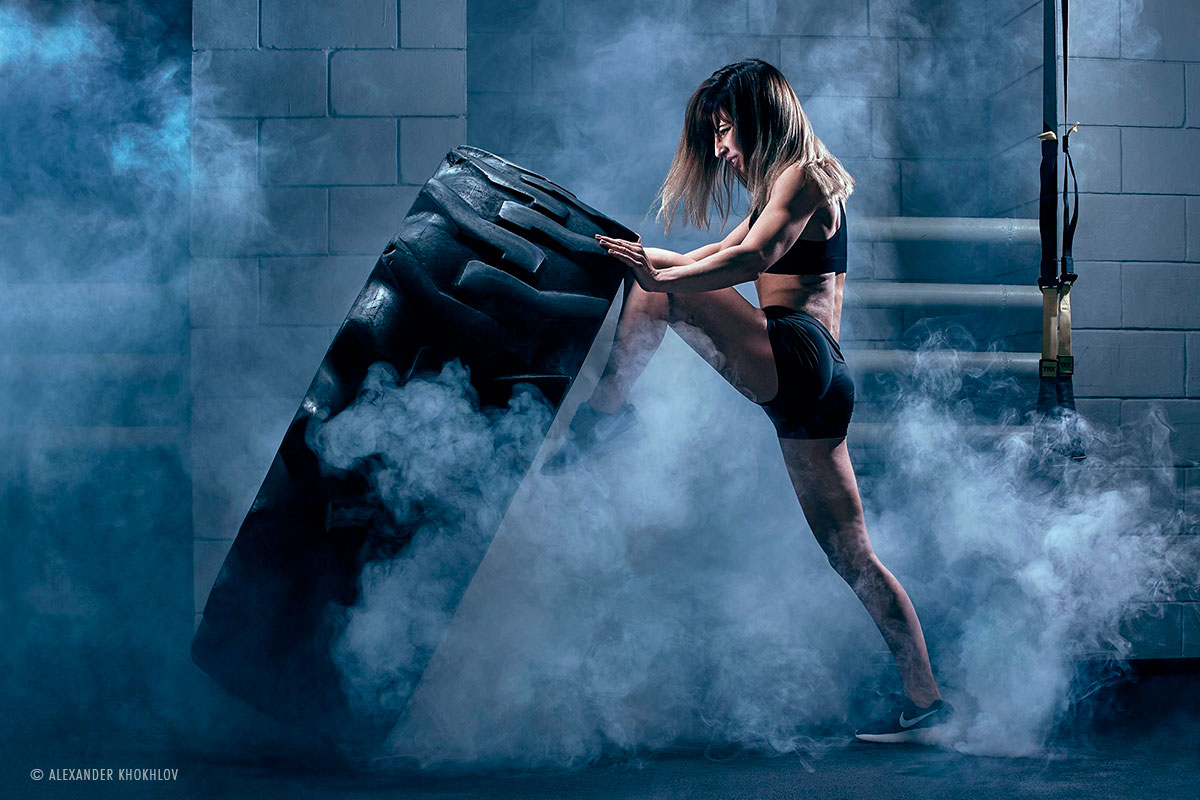 WORKING WITH THE HENSEL WI-FI REMOTE

“At the beginning of the article, I noted that we used Hensel Expert D 500 monoblock with built-in Wifi module. In practice, the built-in ‘Wifi Remote‘ function proved to be an indispensable feature for this shoot. Using the Hensel Remote application, which is installed on a smartphone or tablet, it was easy and convenient to operate the settings of monolights both individually and in a group.

Working in a very large space, we saved a huge amount of time by not having to walk to light sources located at great distances from each other in order to adjust or see their settings.
It was particularly handy when working with the monolights that were on overhead boom stands as we didn’t have to lower them to adjust or see the various settings on the strobe.” 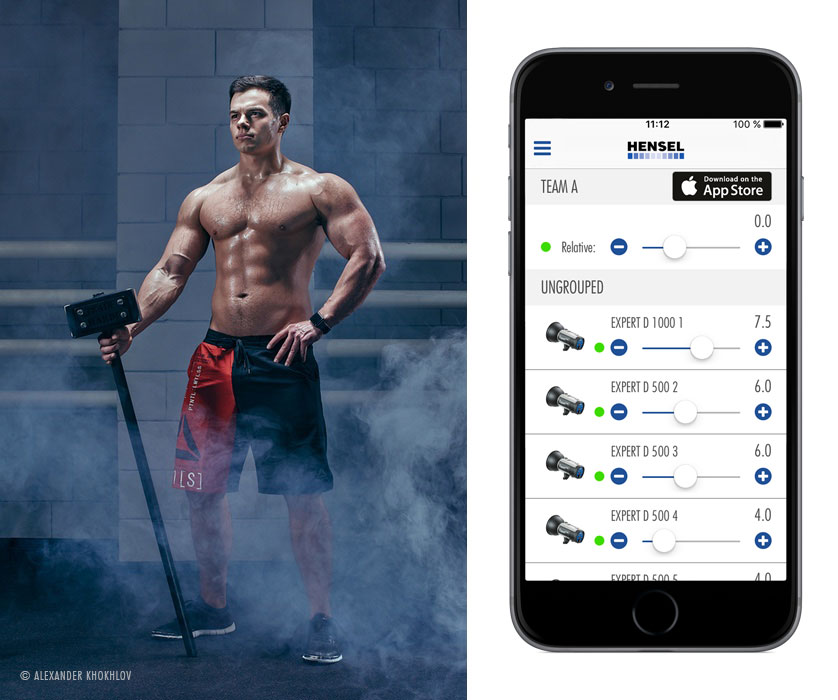 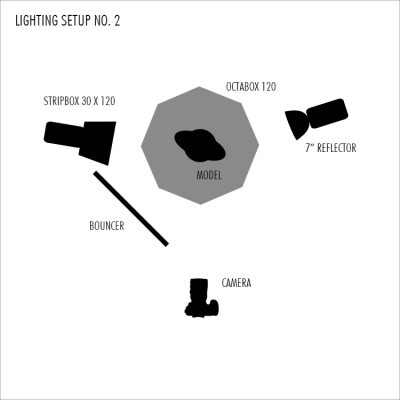 “For shooting in the next location we used a similar light setup with a few minor changes. As in the case of the first shots, the beauty dish without honeycomb grid served as the main light, while the 120cm Octabox suspended from boom stand acted as both the top illumination and the cross light.

To illuminate the smoke, we placed a head with reflector to the right horizontally at a distance of about three to four meters to the subject. This also served as a back light. To illuminate the lower part of the frame (model’s feet, floor, weights and box), a monolight with a Stripbox was used, which lay directly on the floor on the left.” 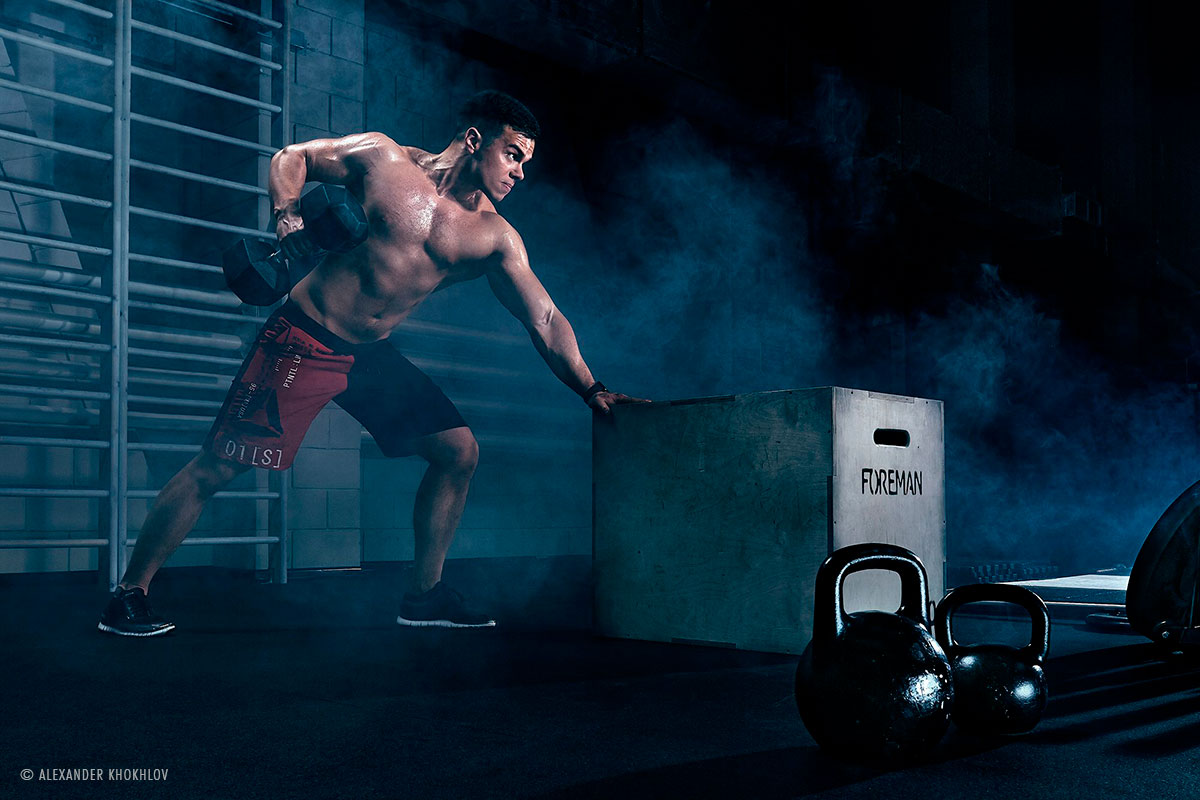 “For contrast, we wanted to pay attention to the ambient lighting, with which we worked throughout the shooting”: 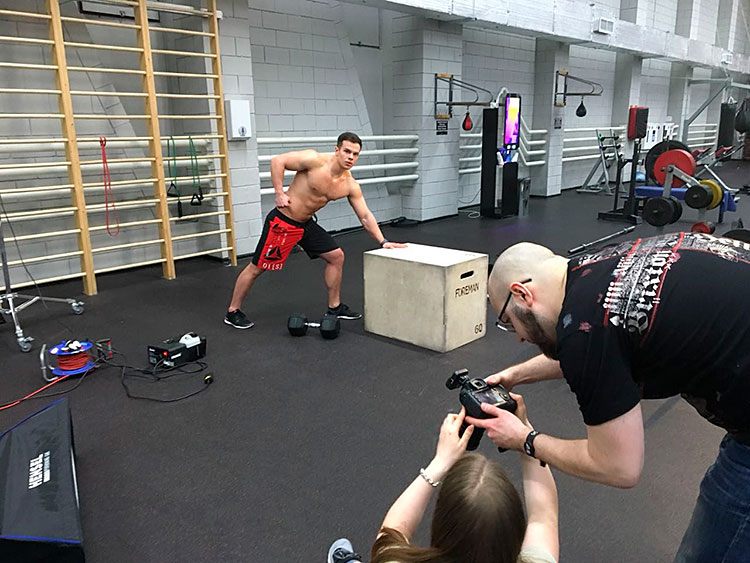 “The same lighting setup was used to create the next two photographs. In this image we shot the athlete doing a jump. In the frame you can see the reflector, which in the previous example remained behind the scenes. Here it not only highlights the smoke and creates a beautiful contour on the body of the athlete, but also adds voluminous shadows to the weights at the bottom of the frame.” 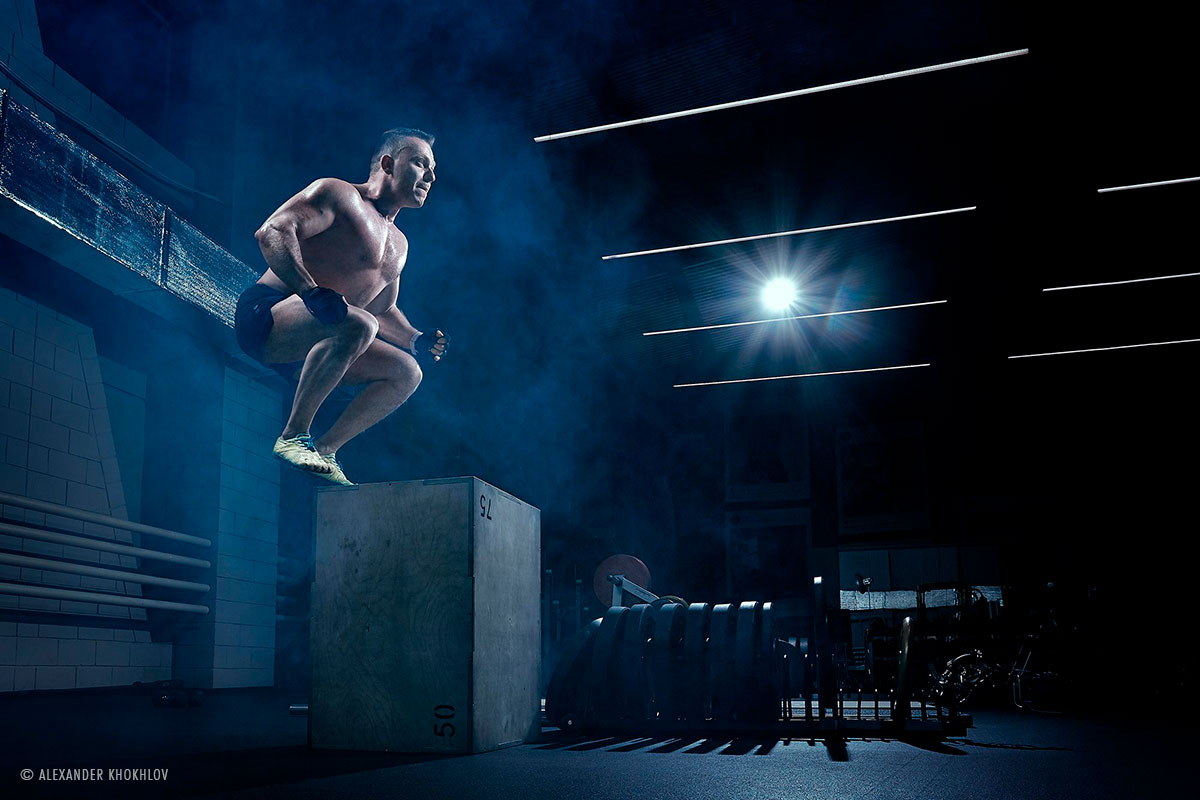 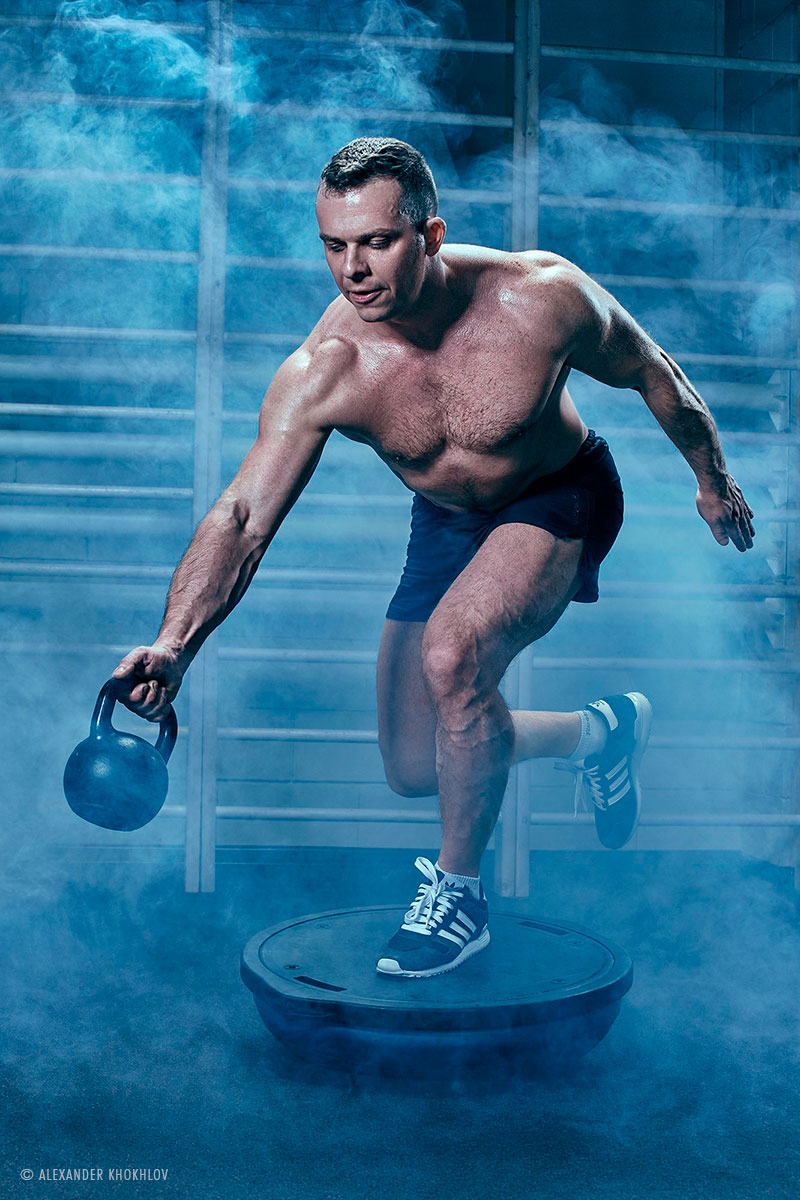 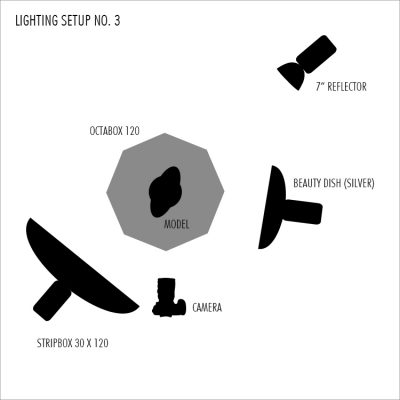 “In order to show the muscular structure of the backs of the athletes, we decided to completely redo the light setup. We left the top illumination, but instead of the 120 cm Octabox in this setup we decided to use the beauty dish with honeycomb grid to accentuate the head, neck and upper back of the athletes.

On the sides of the models at the same distance we positioned the two Stripboxes, which acted as both a fill and a rim light. To softly fill the other shadows behind the camera, we used the large umbrella with a diffuser.” 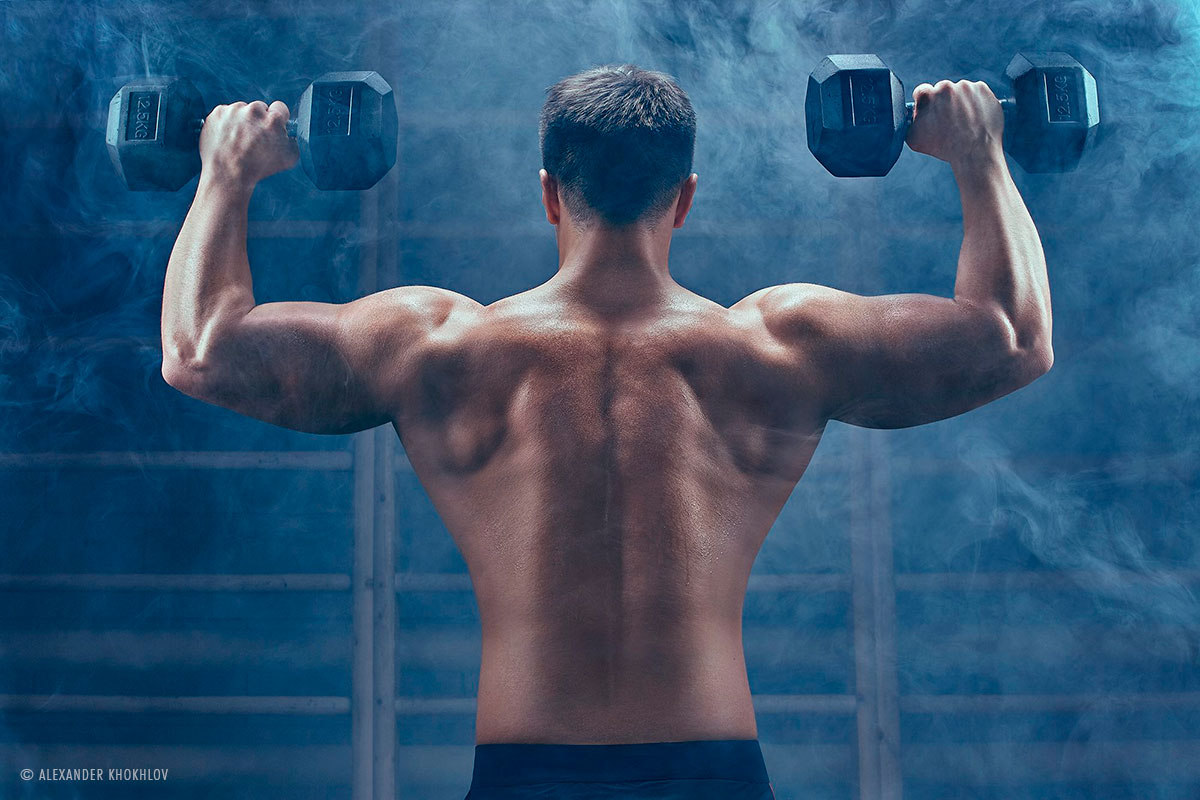 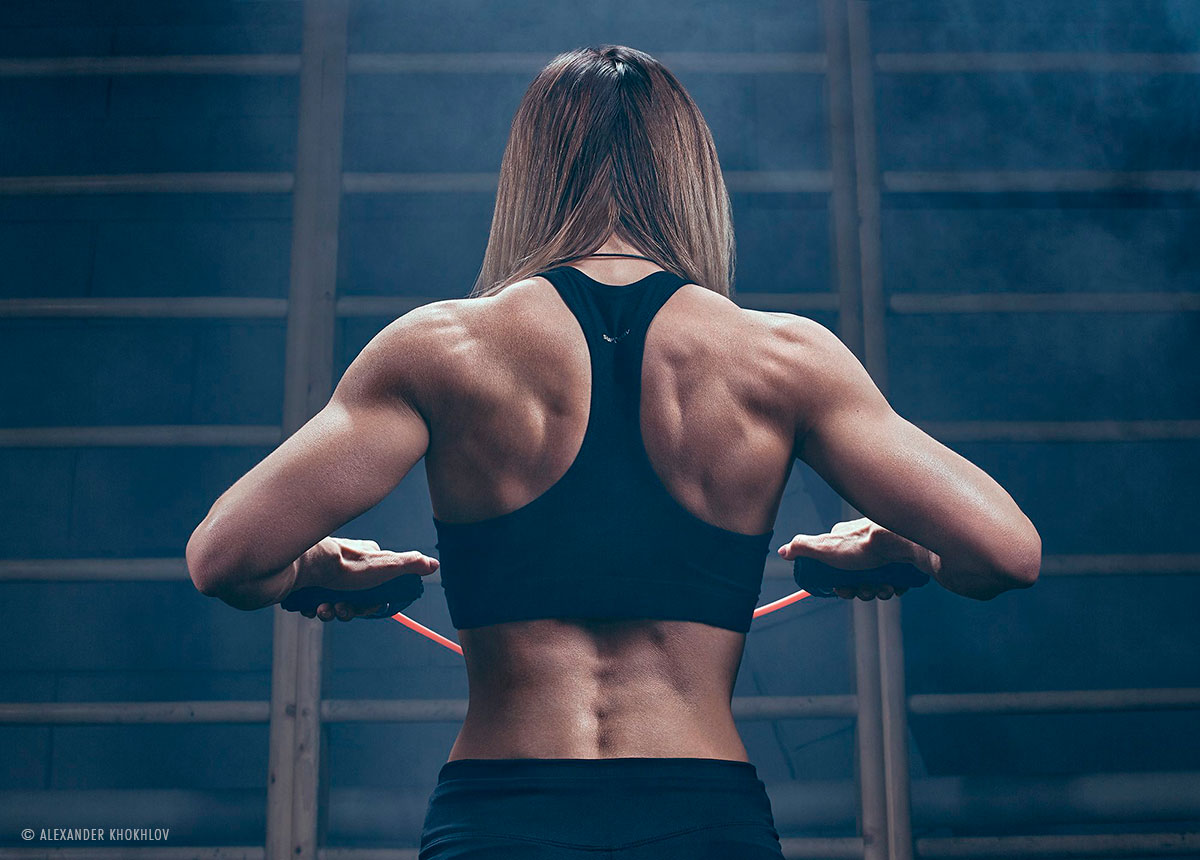 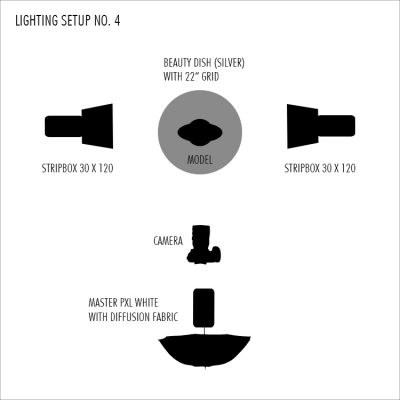 “Even though our athletes were tired towards the end of the session, we persuaded them to do a few exercises with ropes for us to shoot. For this, we decided to return to the basic cross-lighting that was used during most of the previous scenes.

The main light, once again, was the Hensel Beauty Dish. The cross-light was a monolight with a standard reflector, placed high on a light stand behind and to the left which illuminated the smoke and helped create backlighting. We also used the 120cm Octabox as a top light, which illuminated the model and the ropes. To further illuminate the feet, a monolight with a Stripbox was on the floor.” 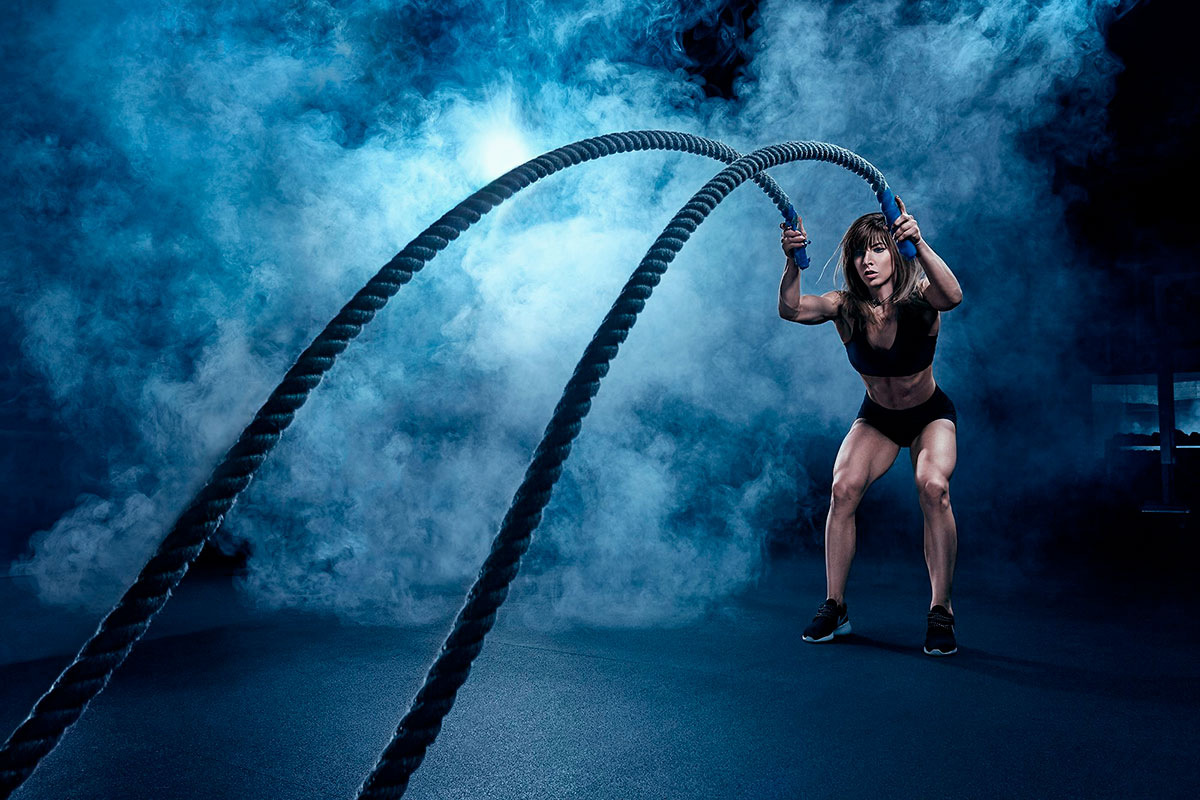 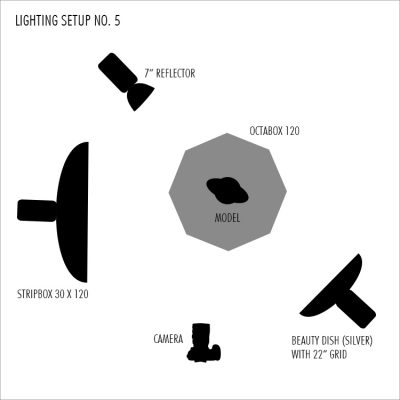 “The whole shoot took about six hours, during which we worked in three shooting areas. On each set we shot several scenes with each of the three athletes. The finished photos were used for coaching portfolios on personal fitness blogs and were also used by the club for marketing and promotional materials.”

This article was originally published at photar.ru and is used with kind permission by Photar. 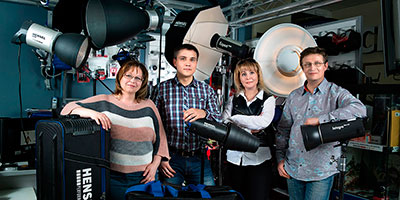 Our competent colleagues at ‘A.Foto’ are looking forward to advising you on all products and individual lighting solutions!

DO YOU LOVE ON LOCATION PHOTOGRAPHY?

Then you should take a look at our anniversary offer:
BUY A PORTY L – RECEIVE SELECTED ACCESSORIES ADDITIONALLY FREE OF CHARGE!
01.12.2018 till 31.01.2019
Learn more HERE!

Back to overview New: Hensel Primary Kit - Wake the pro in you! Making of "Kitchen Heroes" with Expert D 500