What a punch! The latest photo technology is simply made for highly dynamic pictures: super-fast cameras and flashes with ultra-short flash duration times, like our Cito 500, inspire more and more photographers to the wildest ideas.

Just like the team of Clockwork Photography in Lübeck – Dennis Klockmann and Sven Risken found their inspiration and especially their perfect model after a meeting with former karate world champion Patrick Urban:

“Patrick is one of sports’ role models in and around Lübeck. The „Regionale Sportlergala“ (regional athletes‘ event) was a great opportunity to get in touch with him. After an initial test shoot with him in our studio (business portraits and athlete’s portraits), we had the idea for this shoot after watching his incredibly fast kicks and punches.” 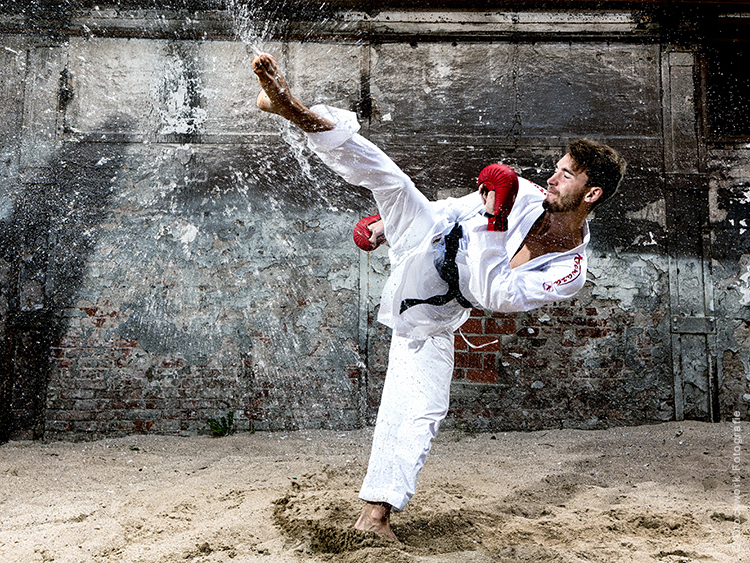 The initial idea and the successful test were soon followed by the how and where. However, as often is the case in the day-to-day business of photography, some hurdles had to be overcome:

“In order to best illustrate the athlete’s movements with a high degree of action, we really wanted to let him ”destroy“ something with kicks and punches. We then quickly realized that the shooting would not take place inside our studio!”

Fortunately, something good was found nearby:

“We started our search for a suitable location and soon found the Kulturwerft located here in Lübeck. Since they were setting up for an event inside, we were just as happy with the location’s outside area. It is often used for beach club parties and such, and offered with its sandy ground and rustic wall structure the ideal setting for our project.” 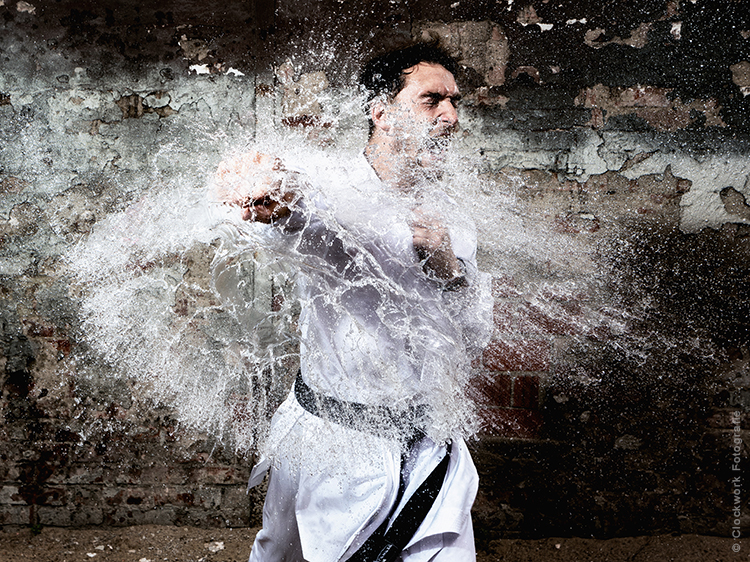 The shooting location was set, but what about the lighting conditions? Dennis and Sven quickly had things under control:

“Since we were dealing with an open-air location on a bright, sunny day, we struggled a bit with the existing daylight. It was important to us to utilize the extremely short flash durations (up to 1/100,000 s) of the Citos so that we could freeze the athlete’s movement and the individual water splashes.

A skillful balance between flash power, flash duration time and f-stop was required for the flash to dominate the ambient light and not vice versa. The large shadow cast by the high walls at this location also helped us. Additionally, we had to safeguard the equipment from water splashes and therefore covered the main light and the camera with foil.” 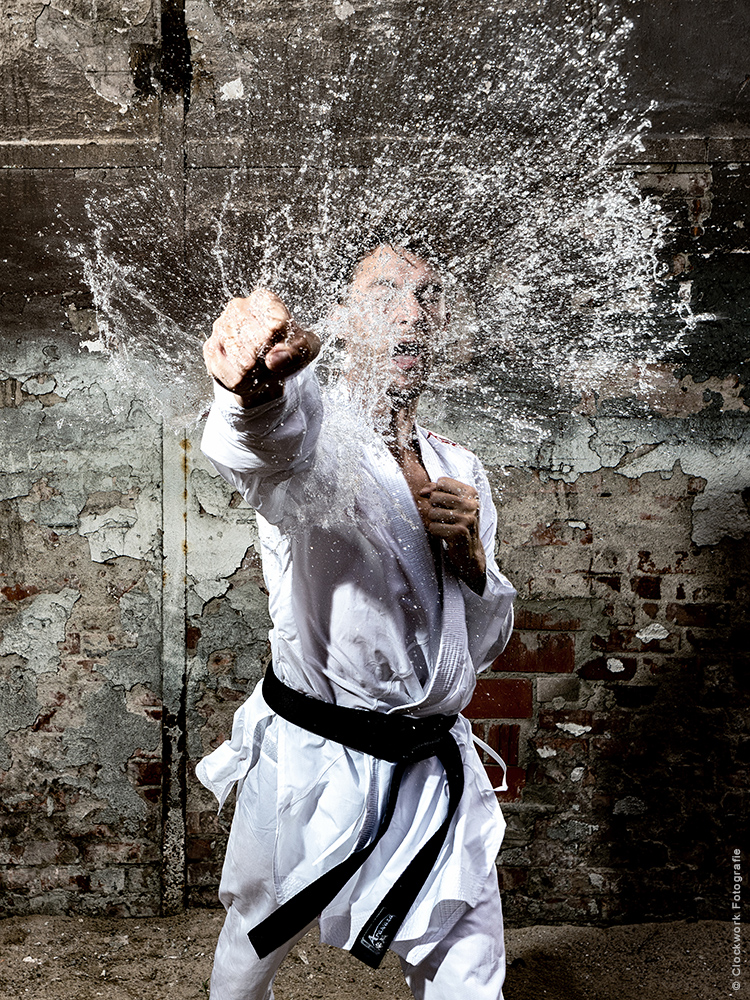 A total of three Cito 500 compact flashes were used. The main light was positioned in such a way that the light hit the motif diagonally from the front left. A 7” reflector was used as a light former.

“Through the usage of the 7″ reflector, we achieved the intended ‘hard’ illumination to depict the athlete as vigorous as possible. An additional motivation for this choice was the high light output which is provided by such an undiffused light modifier.”

The two other Citos were placed each to the left and right of model Patrick, slightly to the back and aiming diagonally at him. Two Stripboxes 30 x 120 (just with inner diffuser) served as light modifiers and had textile grids attached:

“We used the grids because we wanted to use the lights from the back only to accentuate Patrick’s body and to create a visible separation from the background. This made it possible to make the images look even more three-dimensional, without having to light the whole scenery too strongly.
We decided to remove the front diffuser so that the ‘hardness’ of the main light wouldn’t be softened but rather be merged together optically. Apart from that, an additional diffuser would have further reduced the light output and therefore would have brought no added value.” 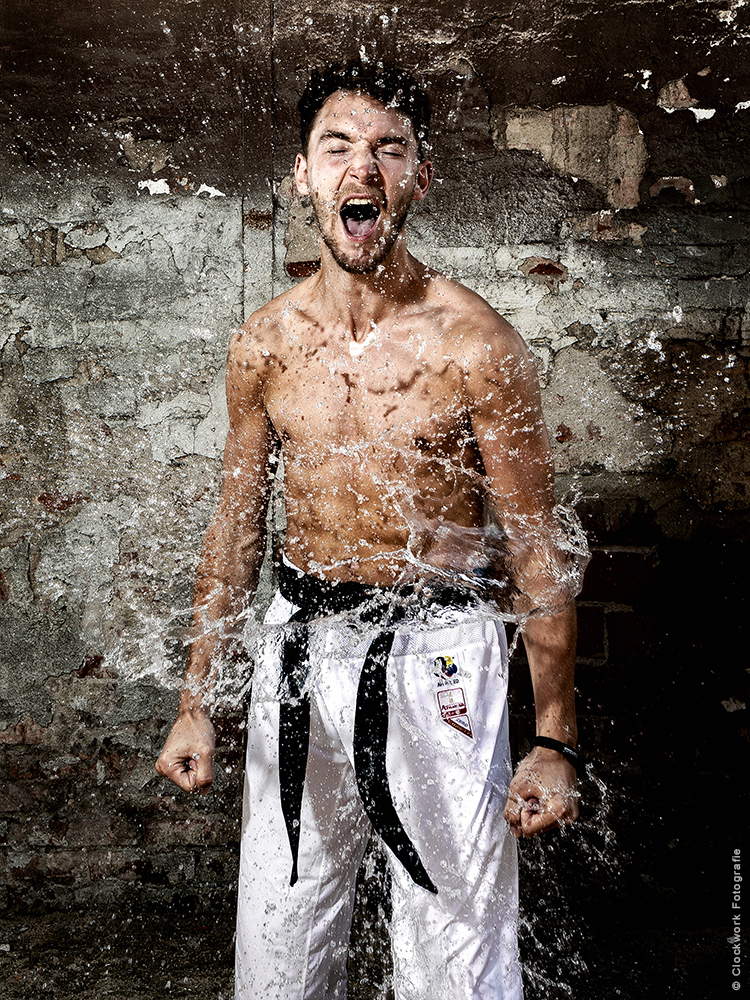 In the following video, come with us behind the scenes of the shoot and see for yourself how these dynamic pictures came about:

We are Sven Risken (Clockwork Agency) and Dennis Klockmann (Clockwork Photography).
Born and raised in Hamburg, we are now taking care of our customers’ needs in our Lübeck-based studio and on location in North Germany.
We’ve known each other since our childhood, so we are well attuned as a team which always strives to achieve the best results in people photography as well as in product photography.

We both are incredibly interested in technology. That is what tipped the scales towards the decision to test Hensel’s “flash bolides” and to document the power in a BTS video for our YouTube channel.